I Was Fortunate Enough To Meet Ormond 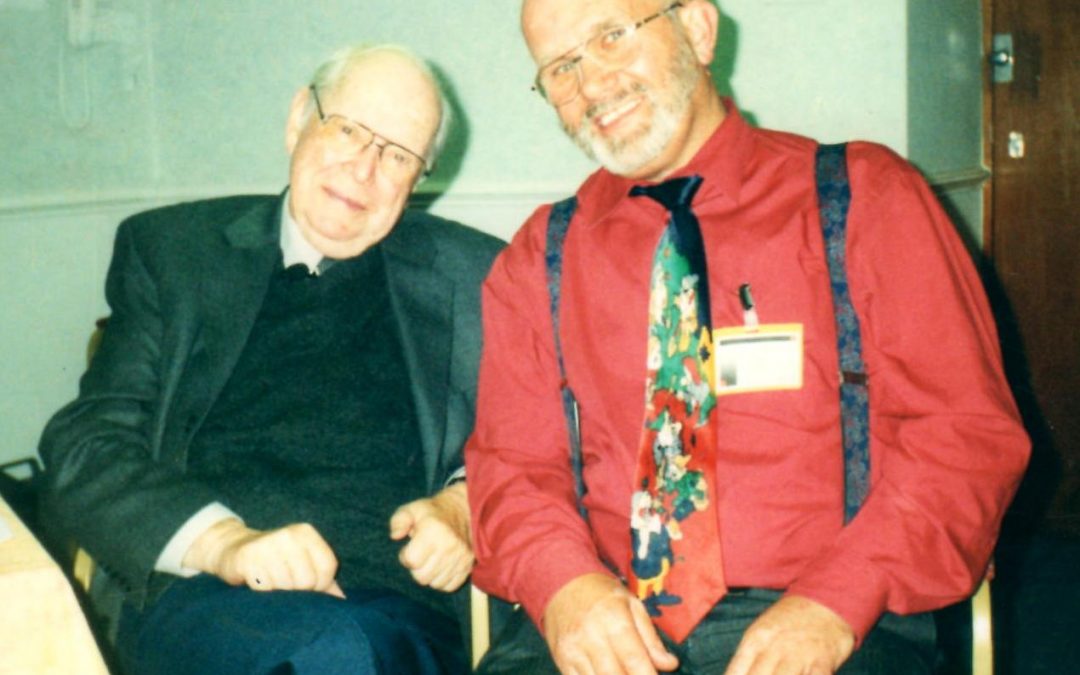 I think you will find this post very interesting reading as it answers many of the questions I keep being asked by many of you.
I was fortunate enough to meet Ormond when he came to London to run a seminar in the West End of London in May 12th – 16th 2002
(Please see my post, dated April 11th 2017 with a photo of Ormond and myself).
Hypnotic Opinions.
(By Ormond McGill (AKA The Dean) 1913 – 2005)
Here are some basic questions you may be asked over and over and over as a hypnotist. My answers are only opinions-
What is hypnosis?
Hypnosis is a deliberately produced unique state of mind in which it becomes possible amazingly to change the mind.
Simple? In simplicity is found that which is complex.
What is suggestion?
By definition a hypnotic suggestion is the subconscious realization of an idea. As this occurs below the threshold of consciousness (awareness), the spontaneousness of such a realization will often come with a shock of surprise.
How do suggestions and hypnosis differ?
Hypnosis is the state. Suggestion is the means of producing and controlling the state. Or, you can say, suggestion produces a state of mind (hypnosis) which is hyper-responsive to suggestion.
What are post-hypnotic suggestions?
Post-hypnotic suggestions are suggested responses given during the hypnotic state after the removal of the hypnotic state. The phenomenon is the “key” to successful hypnotherapy, as the suggestions continue to affect the behaviour in daily life.
Will a person always emerge from hypnosis?
Of course. Even in the most profound hypnosis, left to him or herself a person will awaken (arouse is a better term than awaken) from hypnosis when they are ready to do so. This can range from minutes to hours; however most arousing from hypnosis is at the command to “awaken!” which occurs in a moment.
What is self-hypnosis?
Occidental hypnotists frequently state that all hypnosis is self-hypnosis. Oriental hypnosis deny this. The truth is that hypnosis is a dynamic state of mind with unique qualities of its own.
What is hetero-hypnosis?
Hetero-hypnosis is hypnosis produced upon a person who is hypnotized by another person. It is a dynamic situation occurring between operator and subject (client in the case of hypnotherapy).

What is auto-suggestion?
Auto-suggestion and self-hypnosis are closely allied. Mainly the difference is a matter of degree of influence; auto-suggestion being a less formal, more alert way, while self-hypnosis is a more formal and more passive way of using the power of suggestion.
What is “The power of suggestion”?
“The power of suggestion” is the response to an idea when it is acted upon subconsciously.
How long should a person remain in hypnosis?
This is like saying, how long should a person do anything? It depends on what is being done.toput the mind into neutral gear, as it were, is good for one as it removes stress and nervous tension. Stay in the state as long as you like and come out of it equally when you like. It’s a matter of comfort.
How perfect is the sub-conscious memory?
Sub-conscious memory is prodigious. Every thought and action of one’s entire life is sub-consciously recorded. In simile it is like the memory bank of a computer, in which the brain can be likened to being a bio-computer. Not only memories of this lifetime are therein, but some say, even the memories of past lifetimes are equally recorded.
Who can hypnotize?
Anyone can who leans induction techniques. But, like all forms of activity, some have more talent and/or do better job at what they do than others. Just remember, that in whatever you do, “Practice makes perfect.”
What is somnambulism?
To understand, look upon a person who walks or talks in their sleep as being a “natural” somnambulist. Somnambulism is acting upon sub-conscious behaviour, while a somnambulist is a person who performs (responds to) such behaviour.
Is hypnosis dangerous?
Just living life is dangerous. If this were not so what a bore life would be. Hypnosis is no more dangerous than anything else. Of itself it is just a state of the mind which is involved is entirely a matter of how it is used.
Is this not so of all you do?
(From the Journal of Hypnotism September 2004)